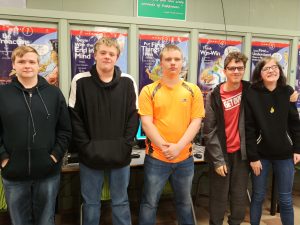 In a best of three match, CV Varsity League of Legends won 2-0 against Ginn Academy.

The varsity team consisted of Mike Bennett in top lane, Dawsan Higgins in middle, and Captain Stanley Rotkoski in bottom; Gwen Rummell played support while Sean O’Connor was the Jungler.

In the first set, Conotton Valley won 41 to 6. All players had a positive KDA. Sean O’Connor was MVP of first set, going 10/0/12 as Nunu. Gwen Rummell had remarkable plays as Senna, winning 18 assists for her team.

During the second set, Conotton Valley won 42 to 13. Once again, all players had a positive KDA. The standout of this match was Stanley Rotkoski as Draven with 11 kills, 0 deaths, and 19 assists. Dawsan Higgins played his best game yet as Talon, going 12/2/9.

Currently, all of CV eSports teams are undefeated.