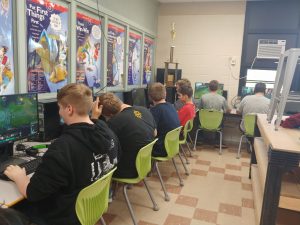 The Conotton Valley eSports League of Legends team started this spring season with a 39 to 2 win against Tuscarawas Valley.

Each member of the team played very well and had positive KDA (Kill, Death, Assist) ratio. Sean O’Connor led the team with the most point participation: 17 kills, 0 deaths, and 7 assists. Followed by O’Connor was Stanley Rotkoski with 7 kills, 1 death, and 7 assists.

The eRockets next League of Legends match-up is Monday, March 9th at 3:00 PM.